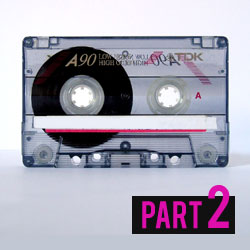 Welcome to part two of the ‘How To Make A Mixtape, The Ultimate Guide’ series. This is a three part series detailing good practices and tips on how to make a mixtape and sell it. For those that haven’t read already (Or even if you have but just want to get reacquainted with the basics), you should read:

before you read this. Also once you’ve finished reading this check out:

If you’ve already read that, let’s move on. In part two we’ll be looking at how ethical it is to use other people’s beats for your mixtape, where to get backing tracks for your mixtape, and finally how to make your mixtape stand out from the crowd. So without any further ado, let’s get into it.


Can You Use Other People’s Beats On Mixtapes?

This is still a question without any concrete answers. While everyone has their own opinions on this matter, mixtapes are generally known for musicians vocalizing already well known backing tracks. This practice is very widely accepted, especially in the more urban hip hop and grime music scenes. Many producers and vocalists don’t mind people doing versions of their material as long as they’re not used for commercial release. If you did want to commercially release your version, you’d have to contact and get permission from the original owners of the martial before you could go any further. You’d also have to pay them royalties if you’ll be selling the song.

There are some people that don’t want others to use their material without permission though, whether people are making money from it or not. As other people’s beats are copyrighted, using them without permission could lead to a law suit. However, this is very rare if you’re only using their instrumentals for mixtapes. The most I’ve seen happen from tons of mixtapes I’ve seen been released is an angry email being sent by the original producer (They wanted to cash in on the mixtape’s success, but the issue was resolved by the producers tune being taken off the mixtape instead).

While I’d say using other people’s material for mixtape songs is largely safe, you’re still using copyrighted material so do so at your own risk.

Where Can You Get Beats For Mixtapes

Once you know what type of beats you’ll be using for your mixtape (Original or already popular beats) you have to go about getting them. If you’ll be using already popular beats, most of them can be found by doing a quick Google search. You’ll want to search the name of the artist that sings the song, followed by the name of the song and then the word ‘instrumental’. So for example, you may do the search “Rihanna Rude Boy Instrumental”. This search result will turn up places you can get your chosen instrumentals on the internet. Some will have to be paid for, some will be free. I recommend you only download off trusted website though, as illegal websites may have viruses on them which can ruin your computer.

One really good website I’ve found for getting instrumentals is Karaoke Version. This website allows you to CUSTOMIZE and download popular beats for a low price (£1.50 / $1.99 EACH). Say for example you want to download a popular instrumental but didn’t like the horns in the song. No problem, you can easily edit the horns out before you download it. Or don’t like the drums? You can get rid of that too. This of course is a great customization feature and allows you to get your mixtape sounding exactly how you want it.

If you will be using original beats however, you may have to do a bit more searching. You’ll need to find producers who can make an instrumental you like and will be willing to let you use it for your mixtape. If you’re new starting out in music this can be tricky, but not impossible. An alternative is to buy beats from a specialized store.

One method I’ve found that works is using forums. Forums are a great place for communities to get together and discuss a specific niche, and you’ll often find producers, singers, designers and much more on the more popular ones. So, how do you go about finding these producers?

First you need to find a relevant forum. I suggest you Google search your chosen genre of music followed by the word ‘forum’ which will give a list of the top forums in that genre. Look around the top three for a while, sometimes the producers hang around and post their material in a ‘production’ area of the forum. Other times you’ll have to to a bit more digging. If there’s no select area for producers, try posting a topic saying you’re looking for producers to feature on your mixtape. Leave a sample of your work and a contact email address. This will hopefully have producers finding your post and contacting you if they like what they hear. Note though, it’s always advisable to post a few replies to other topics before you post your own to look like you’re part of the community. You’ll get a much better response if you do this as you won’t look like you’re just spamming the forum.

Another place you can find producers is MySpace. You may already have an idea of some producers in your chosen music genre, but if not, do a bit of research and MySpace message these people. When messaging someone to ask for a beat, make sure you keep the message short and straight to the point. Even if they’re a slightly well know producer they may be getting messages every day, so you’ll need to be able to make your point quickly. You also want to appear professional (No slang or short hand, message fully spell checked etc) and list the benefits of you using their material. Lastly, make sure you give a sample of your material and contact details so they can get back to you if they so choose.

These are some of the main and most effective ways for getting beats for your mixtape, but there are many others so don’t be afraid to experiment with other methods as well.

How To Make Your Mixtape Stand Out

Mixtapes in some genres of music have become pretty much a standard thing. Even if they wouldn’t define it as a mixtape, a demo with 6 or more tracks if basically what a mixtape is all about. So with everyone having or making mixtapes it’s important for you to make yours stand out. But how can you go about doing this? Here are a few ideas:

Parts one and three of the ultimate mixtape guide are now out, so check them out via the below links for some more great mixtape tips!

Well, that’s about it for part two of the ‘How To Make A Mixtape, The Ultimate Guide’ series, in part three we”ll be giving tips on pressing up your mixtape, releasing your mixtape and pricing your mixtape.

Make sure you sign up to email updates at the top of this page to be sent part three directly to your email inbox once it’s available. Alternatively, sign up to the RSS feed below to be notified whenever we have a new post. As always, I’m looking forward to reading your comments.

16 thoughts on “How To Make A Mixtape, The Ultimate Guide Part 2”