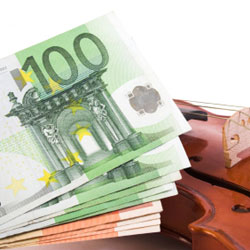 Like many musicians, I’m sure at some point you’ve dreamed about making it big. To have unlimited adoring fans, enough money to live the life you’ve always wanted, and to carry on doing what you enjoy; making the music you love! This is a natural dream for all starting out musicians, though it’s not always as easy as that…

In all honesty, only a very small percentage of people make a worthwhile wage from their music. The majority of musicians unfortunately don’t break even, spending money pressing up CDs that don’t end up selling. I’m not saying that their CDs aren’t worth buying (Although some of them probably aren’t), a lot of people just don’t know what to do once they have their music on the shelves. Humans aren’t naturally sales people after all…

If you learn how to sell, are self dependent and willing to put some elbow grease in however, it’s perfectly feasible to earn a full time living from your music. I believe it’s possible for a talented musician with certain qualities (A willingness to learn how the business works, a marketable talent / image / personality, enough time to put the work in) to earn anything from 20k per year upwards.

Do You Think You Can Achieve This?

I’m going to give you a hypothetical situation, and I want you to tell me how achievable you personally think this is for your music:

Assuming 20k a year is enough to live off, via a combination of single and album sales, performing shows and selling merchandise, you can earn a full time living. Here’s the basic math:

Of course, there will be expenses. Minus studio costs of say £500 (25 hours at £20 per hour, which should be more then enough to record an album as well as promotional songs and singles) and other expenses such as website hosting and tools to set you up selling your music online (We’ll say another £500 to cover everything, although this should be a lot less) and you’re looking at a £20,000 profit for the year.

Of course this is a very simplified calculation and there are a lot of other factors you have to take into account such as added expenses for marketing (Though it is possible to get this largely done for free if you know how).You may also focus more on monetizing you music in other ways, but I’m sure you get the idea I’m trying to make.

So now let me ask you, how realistic do you think selling 4000 singles and albums a year is? Or in other words, 11 single and albums a day? It doesn’t sound so hard when you put it like that does it… And bare in mind, if you sell a bulk of that in your album launch month (Say 1500 copies in the first month) you’ve already made the majority of money you need to make for the year!

So what do YOU think, do you think you could get to the stage where you sell 11 pieces of music a day? Let us know your thoughts in the comments.

1 thought on “Can You Make A Full Time Living As An Independent Musician?”