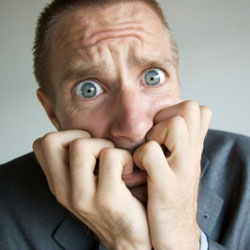 Suffer from gig nerves? Then this is the article for you…

Public speaking is seen to be a fate worse then death for some. The process of standing in front of a room full of people delivering a speech can make even the most bubbly person shake from head to toe. If you want to take your music career to the next level however, most likely you will have to speak in public at some point. And not only will you have to speak, but you’ll also have to perform your music and get on an elevated stage so everyone can see you CLEARLY. Sound fun? Well actually, it can be once you get used to it! Some people truly believe performing live to fans and connecting with them in person is one of the best parts of being a musician. If you’re one of the people who suffer from pre gig nerves or performance nerves however, we’ve created a guide to minimizing pre-performance nerves, and getting you comfortable with performing shows once and for all…

This is the obvious one, yet the one a lot of people seem to miss out. You should already be practising and developing your music anyway, but even more so if you’ve got a performance coming up and you’re nervous about the whole thing. The main benefit of getting to know your performance inside out is that at one point your performance will become second nature to you. This means that it’ll be harder to freeze on stage as you only have to remember the beginning. Once you get the beginning part done, everything else should just flow out on auto pilot. Another benefit of practising is it can reduce nerves. While you still may be nervous about performing the show, you will feel a lot more nervous if you wasn’t sure what you should be doing and would have to ‘wing it’ on the night.

Perform In Front Of Friends (A Home Performance)

Performing in front of friends and family means that you can also pick up useful tips about your performance. Having an outside view can be very handy as you can’t always see what you’re doing wrong. They can let you know the parts you need to improve on and anything else that they noticed. It’s important however that your friend is honest, as without honesty you won’t learn and improve on any mistakes you’re currently making. If they tell you everything’s perfect but your movement or delivery isn’t up to scratch, you won’t learn. You’ll also end up giving a performance with these mistakes, mistakes that could’ve been put right with constructive criticism and a tweak or two.

You want to make sure there’s as little stress as possible before your shows. If you’ve got a show coming up and you’re not prepared, it’s easy to get stressed. And stress will bring on even more nerves, so it’s not ideal. One way of minimising stress is to make sure you’ve got everything planned out. You should have a check list of things to do and bring to your performance, as forgetting your CD or a crucial instrument is the last thing you want to do (Having to run back home to get it will defiantly pile on the stress). You can also minimise stress by making sure you know how to get to the venue you’re playing at, and giving yourself enough time to get there. Being early and knowing the full details of your performance (If possible) can also help, as can having a meal and plenty of (Non alcoholic) fluids before your performance. While it may sound weird, making sure you’ve gone to the toilet can help too. As you get closer to your performance time, you body can start playing up in all sorts of ways. You may find yourself suddenly needing to use the bathroom as you’re going up on stage, so going before will ensure it’s just nerves and you’re not actually going to make a mess on the stage.

All these mentioned points can help reduce stress, and will make sure you have less on your plate on the day.

Start By Performing At A Small Venue

After performing in front of your friends, the next step is to start performing shows in front of strangers (Aka potential fans). If you get pre gig nerves and are nervous about performing in front of people, I’d advice you to start performing in small venues. Some local venues only have small audiences which get even smaller on certain nights. A good idea is to approach these venues and tell them you’ll play for free. If they accept, they get a free act for the night and you get to practice performing your music in front of a small audience. Now the reason you tell them you’ll perform for free isn’t because you’re not good enough to charge this venue. It’s because they’re more likely to give you regular shows if you’re unpaid, and you need multiple shows in quick-ish succession to really get rid of your nerves. You want to be comfortable performing gigs, and the main way to do that is by doing them more often. It’ll soon hopefully become standard procedure to you, and first gig nerves won’t effect you as much (If at all)…

One thing I’d say when it comes to getting a venue to do your first live performance, is open mike nights aren’t ideal. While they’re easy to get in terms of you just having to turn up and put your name down, they’re too easy to bottle out of. Where as with a booked show once you’re there you know you have to perform, with open mike nights you can choose whether to go up or not. And if you’re really that nervous, there’s no ‘strings’ that are stopping you from walking out and going home.

Hanging Around Before A Show Can Increase Nerves

While it’s important to be punctual to a show, it’s not always a good idea to hang around waiting for your performance. This is when the real nerves can kick is, sometimes that wait can be very long and uncomfortable (Butterflies in your stomach and nausea anyone)? So it’s often a good idea to keep your mind as occupied as possible. If you’re at the venue and have an hour before you’re due on stage, it may be a good idea to leave and quickly check out the local attractions for 40 or so minutes. Though you may still think about the show, you mind will be a lot more occupied if you’re looking for a shop or getting something to eat (If you’re not to nervous to eat). This will make the time till your show go a lot faster then if you were just sitting waiting at the venue. If you do go out though, make sure you leave yourself enough time to get back and set up for your set.

Motivate Yourself Before Going On Stage

When it’s time to go on stage, it can be a good idea to motivate and psyche yourself up. Telling yourself “I’m here now, I can do it” and “To hell with it, let’s get this show on the road” can give you the temporary burst of confidence you need to get yourself up on to the stage. Even if you’re more nervous then ever, tricking yourself into being confident for just the beginning of your show can be the difference between getting on stage to perform and the announcer calling your name only to realise you’ve escaped through the back door. If you need more motivation, why not ask yourself what your favourite musician would do in this situation? Or the opposite, think of someone you don’t rate very highly that performs live and think “If they can do it, I should be able to too”. Use whichever form of motivation that gets the job done.

Performing gigs can be very nerve racking, but it’s also very important for most musicians to be successful. You wouldn’t be reading this article right now if it wasn’t an important part of building a successful music career, you must want to be able to perform. So next time you going to do a show and get nervous, remember why you’re there. Who are you doing it for? YOU. Why are you doing it? Because it’ll help give you the music career you’ve always wanted!

Even if you get performance nerves, remember that they won’t necessarily be there forever. As with most things in life, the more you practice, the better (And less nervous) you’ll become. Who knows, you may even end up enjoying doing live shows. Don’t go on stage one time, have a bad experience and vow never to do shows again, learn from those mistakes and become a better performer for it!

We’ve mentioned many ways to counteract performance nerves and gig nerves, but there are bound to be more methods that we haven’t mentioned which you may use. If you’ve got any good ways of counteracting performance nerves, please let us know below in the comments section below. If you’ve used any of the above methods before to good success, you can also let us know. Now that you know how to get rid of pre gig nerves and first gig nerves, why not learn how to get gigs for your band? Alternatively, check out more tips on preparing for your first live show. Good luck dealing with your pre gig nerves!

10 thoughts on “Dealing With Gig Nerves And Performance Nerves, The Ultimate Guide”