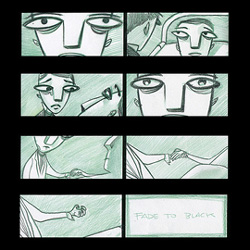 
What Is A Storyboard?

A storyboard is a step by step plan of how your music video will go. On this storyboard, you will have rough sketches of how you want each scene to look, as well as notes on what you want to be happening. While storyboards can be designed on white boards of black boards, it’s often easier and more convenient to design them on paper. This is because it can be easily duplicated and distributed to anyone that needs a copy. People that may need a copy include the video recorded, the director, the video editor, and anyone else that’s involved in your music video.

Why Do You Need A Storyboard When Making A Music Video?

Before we look at how to create a storyboard for music videos, we need to know why you need to. So, why are storyboards so important? Simple, because planning is key to making everything run smoothly.

When it comes to making a music video, some people like to completely overlook making the storyboard before hand. Instead, they have a rough idea of how the video’s going to go, and just record on the day. In my opinion, this is a mistake. Planning is vital for using your time as effectively as possible on the day of the shoot. As you’re paying to hire a video recording crew, you will most likely have a limited amount of time to shoot your video. If both you and everyone else knows exactly what they’re doing (Especially the video recording crew) then everything will go a lot quicker.

Explaining to your camera man exactly how you want the shot can take a while to do. If they already know before hand however, this will save a lot of time on the day.

Another reason you need a storyboard when recording a music video, is so you know what footage you need to get. There’s nothing worse then going to edit your video and realising you haven’t got enough footage or forgot to add a certain scene. If you have a story board before hand, you will be able to see exactly what footage you need to capture. Furthermore, you can plan what order you’re going to record the footage in, the most important parts going first.

Creating storyboards is all about saving time and getting things right on the day, which can be more useful then a lot of musicians realise.

What Should You Include In A Music Video Storyboard?

Ok, so now you know what a storyboard is and why it’s so important. But what should you actually include on your storyboard? Here are the main things:

You will also need to make a note of any effects you want put in the scene, any lighting effects you expect, and any scene switching effects (E.G. If you want two scenes to keep switching with each other every couple of seconds). Most of these things will go in the notes section, or on a separate page if they are instructions for your video editor. If you want any part of your video to be a certain way, make sure you note it down here.

How To Create A Story Board For Your Music Video

Once you know what to include, it’s not hard to make a story board. We’ve made it even easier by giving you our free storyboard template in the section below, so all you need to do is download that, print it up and fill it out. You fill it out by sketching each scene in the provided box, and make a note of the what’s happening in the text area. You will also want to include how long each scene last for, so you know how much footage you need to record.

Below is a free printable music video storyboard template which you can print out and use free of charge. It is pretty easy to use, but if you’re not sure what to put on it, simply check the ‘What Should You Include In A Music Video Storyboard?’ section above. This will tell you how to use this free storyboard template for music videos. For now though, here’s the free template:

How To Create A Story Board For Your Music Video Conclusion

Storyboards are an essential step in learning how to make a music video. They’re a great time saving tool, and help ensure you have covered all areas on the day of your video shoot. If you’re learning how to record a music video, you should also add storyboard making into your skill set. Now you know how to create a storyboard for music videos and have a free printable template to get you started, good luck with plaining your video.