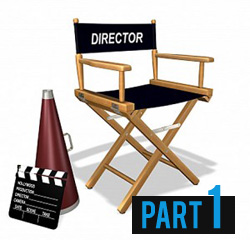 Welcome to part one of the how to make a music video series. This is a two part series that will guide you through the process of getting a music video made. In this series we won’t cover how to use your own camera and record your own music video, that will be covered in a later post. We will however assume that you’ll be working with a camera man and a video editor, and that they are professionals who have their own equipment.

This guide focuses on everything that you personally need to think about and sort out to make your video come out how you want it. Many people fail to realise how much work needs to be put in to make a music video, so we’ve put this guide together to let you know step by step what you’ll need to do. In part 1 we’ll show you the importance of picking the right song to match your video’s aims, what factors you need to think about with regards to the look, feel and speed of the video, and how to create a storyboard that will get everyone on the same page when it comes to making it.

Please Note: How To Make A Music Video Part 2 is also out now. I advise you read this current article first, and then move on to part 2 once you have finished.

How To Make A Music Video – Pick The Right Song

Before we go into talking about how to make your music video, I want to talk a bit about your song selection. As you will probably know, creating a music video can be a costly process. Because of this, it’s best to make the right kind of video the first time around. Some people think they can make any type of music video and fame will reach them overnight. This is far from true however, as a music video (Like a song) is only a tool you can use to help make your name. If you pick the wrong tool, the final results can be less then effective.

Questions you need to ask yourself include:

Depending on these answers, you may pick a different song to make a video for. For example, let’s say you make rap music. If your aim was to reinforce your underground status, you’d pick a very different song then you would if you was going to try and go commercial.

The main aim of making your first music video should be getting it seen by as many people as possible. You especially want to gain new fans, and get them onto your mailing list where you can contact them any time you want.

While you could make a niche video that would only appeal to a section of your potential fans, this will make it harder to gain the exposure or royalties then a wider reaching song could get. Depending on your aims however, you should pick the song that you feel will best achieve your goals.

How To Make A Music Video – Think Of A Concept

Ok, so you’ve got the perfect song which you’re going to make a music video to. The next stage is to get an idea of what you want to happen in your music video. This is creating a concept, something many of you should be good at if you already write your own original songs. Here are some things you’ll need to think about when trying to establish the concept and feel of your video.

Once you have thought about all of these things, you will have a good idea of how you want your music video to be made. You will know roughly what’s going to be happening in it, as well as what look and feel it’s going to have. The next stage is creating a storyboard, and planning out your music video scene for scene.

Ok, so it’s time to create a storyboard. I have already written a guide on everything you need to know about creating storyboards, so instead of writing it all again, check out this article on how to create a storyboard for music videos (Opens in a new window, be sure to come back here once you’ve read it). This article will show you what storyboards are, why they’re vital when creating a music video, and how to make one easily. It also includes a free storyboard template for you to use. If you’re going to learn how to make a music video, you should do it the right way. Get your storyboard right.

That’s it for part one. By now you should have a song to record a video for, have a good idea of what you want to include in your music video, and be well on your way to laying it all out in your storyboard.

Here is How To Make A Music Video Part 2.

In part two we’ll be looking at how to find the right company to record your video, what things you’ll need to have sorted for the day of the video shoot, and more. So check out How To Make A Music Video Part 2 now.

2 thoughts on “How To Make A Music Video Part 1”