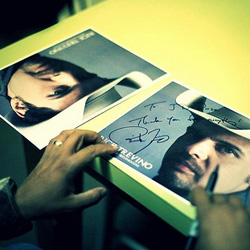 Hi guys, I’ve got something very special for you today! This is a fantastic guest post by Christine Infanger, one of the most helpful and knowledgeable members in our members only forums. She has left more then a golden nugget or two for forum members, so I had to approach her for some information she could share here for free. If you read and enjoy this article (Which you should), please follow her on Twitter as well as sharing this article on your favourite sites (Facebook, Twitter etc). Ok, so without wasting any more time, here’s Christine:

In an era where social media is a finger-click away and virtually everyone has a smart phone of one kind or another, it’s hard to make your band stand out in a sea of artists fighting for a chance to be heard.

A few years ago I was offered the opportunity to head up the marketing and promotion for an agency based in New York City. They needed a competent go-getter (me) to handle not only the Chicago market, but the Midwestern United States as a whole. Additionally, I was in charge of establishing and maintaining Street Teams for a number of the artists on their roster – both well known and unknown – for the entire US.

This was a prospect which had me giddy with anticipation until the catch came: I was to do all of this with virtually no budget (Read: Money).

Here are a few things I learned. Hopefully, enumerating on my experiences will prove helpful for a few.


Ask For Help Promoting Your Band

This may seem rudimentary but it really is that simple.

If you aren’t yet at a stage in your career at which you’ve got managers, promoters, and a PR team to help you with such things, ask around to see who may be willing to lend a hand. There are always students at universities studying music business, management, marketing, or advertising who need proverbial guinea pigs to learn the basics from.

I myself have began working with and for several people this way. The beauteous part being, such people will typically help you for free.

You can also ask within your family and circle of friends – can someone pass out flyers advertising an upcoming gig? Can you get a group of friends together and give out sampler CDs or mix tapes?

See if shops, clubs, cafés, restaurants, hotel lounges, and any establishment you can possibly imagine will play your music for their clientèle. One band I was promoting played music that was very avant-garde, yet still calm and a bit serene at times. I read about a new “hotspot” hotel that everyone was going to and went to talk the manager about them. I told him about the band and how I thought the music would be a great addition to the ambience. And guess what? He played their music!

A band that would have gotten virtually no radio play in Chicago still got heard by hundreds of people, because I asked. Manners and a smile go a very long way. that will never change.

Many college students have spare time and are fairly open to new music. Take advantage of this!

I would literally walk around college campuses with an iPod and headphones to let people hear the new artists I was promoting. I got response on the artists and the people got to listen to new, up and coming acts (And let’s face it, who doesn’t like to say they heard someone before they were “known”).

If possible, I would hand out stickers, buttons, and CD samplers. Any swag that I had, no matter how small. People love getting things, even something as simple as a sticker to say “Thank you for your time, give our band money”.

In my travels, I also found that college radio stations are more than willing and eager to work with artists on just about anything. They have airtime to fill, requirements to meet, and they want to host the “hottest” radio show around. If they can get a few handfuls of CDs, free download codes, or the aforementioned stickers and buttons to give away to listeners, they are often very grateful.

If you have upcoming gigs, even better. Everyone wants to say they were on the guest list for the “insert your band name here” show last night. Letting a person or two into a gig for free could pay off en masse if they tell all of their friends to join them and make a night of it (Which, in my experience, frequently happens).

Get A Street Team For Your Band 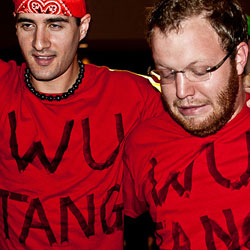 Street teams can be a wonderful tool for an act with a slightly established following. Music fans talk about the music they enjoy, and you don’t have to pay them to do it. Use word of mouth chatter among fans and peers as a powerful marketing machine!

If your band alone hasn’t quite established the fan base for an entire street team, why not partner up with similar artists in your city and create a “your city” street team? (Editor’s Note: Great tip I hadn’t even thought about, thanks Christine :)).

Do keep in mind, for street teams to be effective, organisation is key. Keeping track of what members are where and what they’re working on (I.e. Passing out flyers for an upcoming gig, emailing local radio about getting your track played, etc) is very important. Delegate tasks to people according to their strengths and comfort levels. Some people love talking to people and would love to hang out at a venue and pass out flyers to the audience of a gig letting out. Others may be better at emailing and making phone calls for you. The more at ease someone is, the better they’ll be at the task at hand…

Be Social With Fans

While it’s wonderful for artists to be actively involved in communicating with fans on the internet, I believe it takes many elements to successfully promote a project, and therefore requires several different approaches. A huge part of why fans love to follow their favourite artists on Twitter on Facebook is to get the sense of being involved and feeling connected to them.

Nothing can provide this more than actually interacting with them in person.

Many artists figured this out long ago. They aren’t playing stadiums, but do enjoy a successful career as full-time musicians with a devout fan base. After each show, you’ll find band members at the merchandise booth signing autographs, taking photographs, and generally chatting it up with their fans.

It may be nice to get a Twitter update from someone, but those are the types of interactions that fans really appreciate and which will lead them to them spending more money on your product.

It also takes very little effort for the artist to spend a few minutes before or after a gig to say a few “hellos”, shake a few hands, and be pleasant to the people paying their wages. You can be a multi-platinum selling act with the greatest management and promotional team behind you, but nothing can replace the artist-fan relationship. Use this to your advantage!

What Happens If You’re Not Part Of The Band?

For those not in the band but rather promoting them, the same basic principal applies. It really all comes down to being kind and friendly, as it’s amazing how far this will go. Again, manners and a smile go a very long way.

Also, it’s important to keep in mind that you’re representing the artist(s). Whether working directly for an artist or for a marketing firm or label, remember, it’s still business. You can absolutely have fun while promoting music, be it your own or someone else’s, but always, ALWAYS be professional.

The key to any of these tactics is to utilise any resources available to you. It’s amazing how many fans you can find if you’re willing to do a bit of work! That’s all for now, I hope you found these tips useful. Please leave any additional advice in the comments section below.

Christine Infanger is a music and music industry devotee based in Chicago. In the past, she has worked for various Indie labels and marketing companies promoting a range of artists.