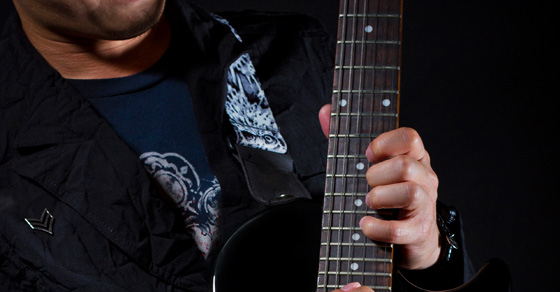 A guitar instructor’s job is to support you in your progress as a guitarist; not to hold your hand through every single step!

Think about it. The average lesson time is 30 minutes per week, which means that you have 167 and a half hours until you see your teacher again. A good student knows that what they do with that time can make a tremendous difference to their progress as a player.

A teacher might have a good reason for not showing you a technique in beginner lessons; usually because they’ve determined you just aren’t ready for it yet. They may be right, but that doesn’t mean you can’t try!

Here are seven guitar playing techniques they won’t teach you in beginner lessons.

This is a technique where you either pick an open or fretted note, and quickly “hammer down” another finger to sound a higher note without picking a second time.

It isn’t necessarily an advanced technique, but it usually requires a little bit of finger strength and dexterity to pull it off, which is why you won’t usually find it in beginner lessons. Hammer-ons can be a lot of fun, because it’s relatively easy to make a series of hammer-ons sound fast, and most beginners like to get to the point where they can sound fast as soon as possible.

Pull-offs are more or less the opposite of hammer-ons, where you pick a fretted note, and quickly “pull off” to another fretted note or an open note without picking a second time.

Much like with hammer-ons, you’ll need to have developed some strength in your fingers in order to be able to perform a pull-off. What makes it a little tricky is that you can’t just remove your finger. You have to pull down (or up) and off without bending the string. It’s a great lead guitar technique, and combined with hammer-ons, it can sound pretty cool.

On a guitar, a trill is where you rapidly alternate between hammer-ons and pull-offs. This is trickier than both techniques combined, because you need to sustain the sound of the notes with the strength of your fingers alone. The idea is to pick once and then let your fretting hand do all the work.

Guitarists like Jimi Hendrix and Eddie Van Halen both have wicked trills, so it’s worth watching their playing to figure out how to play an effective trill.

In some circles, this technique goes by other names like “double fretting”, but the basic idea is similar to hammer-ons and pull-offs, except that, in addition to your fretting hand, you also use a finger (sometimes multiple fingers) from your picking hand.

There are a number of different ways of performing this technique, but typically, you would fret two different notes with your fretting hand. Then, you would hammer down and quickly pull off of a higher note with the index or middle finger of your picking hand, and as the lower note sounds, you would pull off to the other note you’re fretting, and then hammer-on the finger you just pulled off again. Repeat this sequence for best effect.

Tapping sounds very impressive, but it’s not that hard to do. What was once a “mind-boggling secret” is now a standard rock guitar technique.

Generally, a guitar instructor has no reason to show you what a slide is or how it works until you’re playing a riff or a solo that necessitates it.

A slide can take many different forms, but the essence of it is this. First, you would pick a fretted note. Then, you would move your finger either up or down the fretboard without releasing the tension on it. If you do it correctly, the string you originally picked should still be ringing out.

In combination with other techniques – including those already mentioned here – your lead guitar playing will begin to sound a lot fancier when you master the slide.

At various points (or frets) on your guitar, you can find what are called harmonics. Without getting into the exact specifics of how this works – because it is kind of technical – if you pick a note with a finger lightly touching (but not fretting) a string directly above a fret, you’ll hear a high, chime-like tone. This is a harmonic.

For beginners, the fifth fret, seventh fret, an 12th fret are the easiest positions to produce a harmonic. Again, you have to make sure your finger is lightly touching directly above the fret, and after you pick the note, try to move your fretting finger out of the way to let the note ring out.

If you’re wondering what a harmonic sounds like, listen to the guitar in the verse sections of Linkin Park’s “In The End”.

This is pretty much exactly like it sounds. The idea is to pick a note and then bend up (or down) on the string, thereby raising the pitch of the note. This can be a little tough to do with any one finger. If you want to cheat a little, try supporting your ring finger with your index and middle fingers, using the combined strength of your fingers (without forgetting which note you’re bending; the one your ring finger is fretting).

Although some string bending does exist with rhythm guitar, most of the time it is used in combination with other lead guitar techniques. Guitarists like Jimmy Page and David Gilmour are famous for their big and tasteful bends, and are worth observing to see what good string bending looks (and sounds) like.

If you find yourself frustrated with any of these techniques; don’t worry. As mentioned, you won’t learn these in beginner guitar lessons.

You may need to spend a little more time building finger strength and practicing the basics before you can move on, but rest assured, if you keep practicing, you will eventually be able to perform all of these techniques fluidly. And from there, you’ll be able to move on to marketing your guitar playing and getting known.

A good guitar teacher probably won’t mind helping you out with new techniques if and when they see that you’ve been practicing on your own. A teacher loves it when they see that a student is taking a proactive approach to their practice routine.