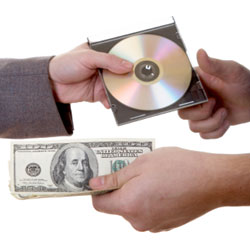 If you’re a new musician or haven’t yet released your first independent CD or vinyl, you may not have come across the term ‘sale or return’ (Or SOR for short). In this article we will be looking at what a sale or return deal is, an example of a sale or return deal, and how to get one.
There are two types of deals you can get when trying to get your music into record shops, a ‘money upfront’ deal, and a sale or return deal. With a money upfront deal, a record shop will buy your CDs from you and give you the money upfront. They then re-sell these CDs for an increased price, keeping all the money they make from them. As the CDs now belong to the record shop, they can sell them for any price they want or even give them away for free if they so choose. While many musicians like upfront deals as they make instant bulk sales, this type of deal is becoming more rare for independent musicians. The only way independent musicians are really seeing upfront deals is if they have a proven record of selling large amounts of CDs, or if they go through a distributor (We’ll look a bit at distributor deals in this post too).
END_OF_DOCUMENT_TOKEN_TO_BE_REPLACED